These Two Twitter Methods Can Scale You From 0 to Millions

It’s an era where social media platforms play an important role in building an online brand. The two Twitter methods I have been using for years can change your status.

No one can deny the fact that Twitter is one of the best places to be at. In the past few years, Twitter has evolved as a business platform.

Though not everyone gets the expected exposure still, there is a lot to discover by you.

Many people mislead this platform with Facebook and LinkedIn. But in the actual sense, nothing is as same as people think.

Twitter is a totally different platform which can be your social branding proof.

In this article, you will learn the most basic yet effective two Twitter methods which will help you score at the top within a few months.

What do You Need to Craft Your Twitter Strategy

You would agree that for every goal, you need a perfect plan and a path to walk on. For Twitter, you need to understand how it works and what’re the two things you have been ignoring so far.

Most of the Twitter users have the misconception of not following anyone. They just want to be the celebrity who will be followed by every single Twitter user.

Let me clear the dust off your eyes and make you understand that it’s an era where billions of people are doing the same as you do.

If you want to increase your circle, you have to approach first.

Put your ego aside and start following others. According to many Twitter experts, you can’t reach your goal until you start using that one “FOLLOW” button.

Let me show you an example. 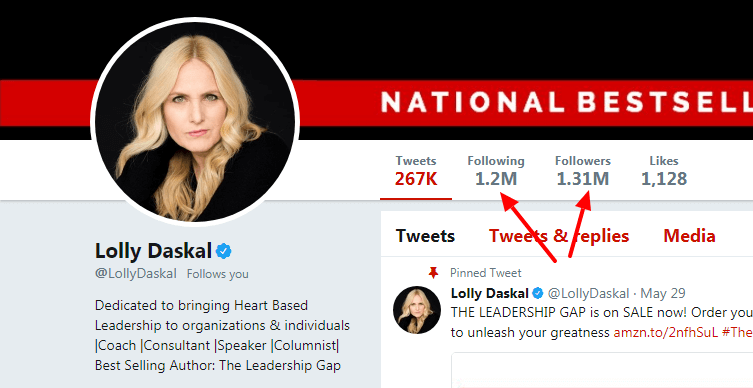 It’s Lolly Daskal, she is an international writer who writes exclusively for Inc.com and you can see that her account is verified by Twitter.

And the most shocking thing is there is not so much difference between the number of followers she has and the number of people she follows.

Do you get what I am pointing at?

“Following others can get you the exposure you always dreamed”

Some people make their mind as if how would they appear like a celebrity if they don’t follow many people. I mean, really?

I have been experimenting with it and you will be surprised to know that I scaled from 2000 to 20,000 followers within a few months.

You can read my journey of gaining 20000 Twitter Followers.

#2. Retweeting is the Another Golden Rule you Shouldn’t Forget

In the past Twitter marketing articles, you may have read it many times that retweeting is what people need to focus on.

Retweeting is the kindest gesture you can ever make on Twitter. I always take at least 20 minutes just to retweet the tweets which can provide some information to my followers.

I am sure, you know what Forbes.com and Entrepreneur.com are. These are the world’s best websites for entrepreneurs.

People spend their entire life to appear on these magazines.

Why are they ruling on Twitter? What’s so special about their brands? Well, it’s because people retweet their tweets.

Let me show you an example which was tweeted only 17 hours ago. And you can see the number of retweets and likes. 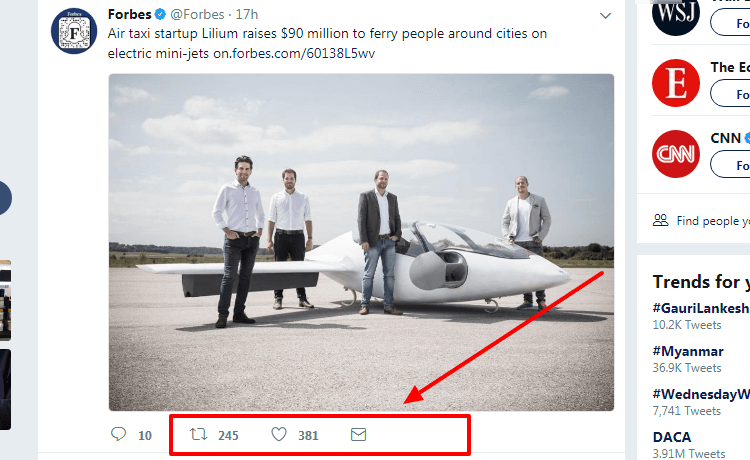 Well, that’s how it works.

You should understand the power of the retweet to make your own brand on Twitter. That’s one of the things I have applying and you can see what I got now.

I always laugh and tell them the story behind it.

It’s all about how you interact with people. Everyone is fond of connecting with someone who knows the value of human bonds.

Maintain the quality with retweeting and you will be rocking on Twitter in a few months.

Well, nothing is better than showing what you’re capable of. And social media is your thing now.

Use Twitter to influence others. It’s a platform using which, you can reach to the people all over the world. And generating a business with Twitter is something you should think about.

Using these two Twitter methods, you can achieve what you have always desired. Well, if you’re a dreamy person and then sorry, it’s not possible to become a super star in a few months.

But you can definitely get the sugar of success. If you have any doubt, feel free to ask.

Add a Job Board to WordPress Without Having Any Coding Skills

What Is Gravatar And Why To Use It For Your Online Branding?

How I Gained 10000 LinkedIn Followers In A Few Months

10 Ways to Find Freelance Writing Jobs (A Guide for Beginners)